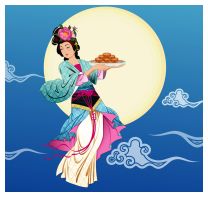 The moon Festival or Mid Autumn Festival 中秋节（zhong qiu jie) is one of the main Chinese Traditional Festivals. It is  on the 15th day of the 8th lunar month, in solar calendar, it will be on the 12th of September 2011.

There are many legendary stories about moon festival. The story I heard most when I was a child is about the moon goddness–ChangEr (嫦娥). ChangEr was a wife of HouYi(后羿, a legendary Chinese hero). ChangEr stole a longevity pillar from her husband and ate it up, she then flew to the moon palace became the moon goddess, she has lived there ever since. In the moon palace, ChangEr’s only company is a rabbit called Jade Rabbit. ChangEr was very lonely, she regretted her act and asked her husband to make moon shaped cakes on the full moon day in August, and call her name. She could then come back to meet him at mid night. Since then, the full moon day of the August (lunar calendar) has become a festival of family reunion, and love. 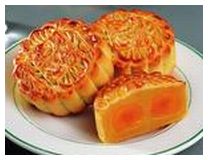 Mid Autumn Festival 中秋节  is one of the most important holidays in the Chinese calendar. When the moon rises in the middle of the sky, families get together, watch the moon, telling about the fairytale, imaging ChangEr is dancing there and sharing and blessing the happiness with people.  With the moon light, lanterns, people singing, dancing, reading poems, the  festival is full of joy,  hope, happiness.

In the Chinese tradition, the moon festival is a symbol of reunion and perfection,  it is also a great day for marriage.