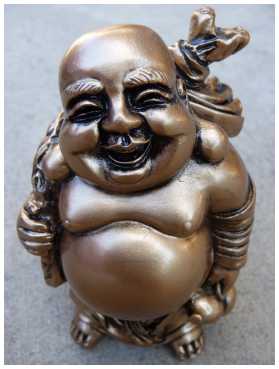 Buddha Statues （佛像）are symbols of the Buddhist religion（佛教）, in the same way that the Cross（十字架） is the  symbol of Christianity（基督教）. This post is not about religions, rather about the respect for symbols which represent religions.

In modern western society Chinese traditional culture, including medicine, astrology, feng shui and philosophy has become popular. There are a lot of books, teachings and objects relating to ancient Chinese arts, which people believe will bring  harmony and prosperity to their life. While this is good, much is merely commercial without knowledge of the background and true meaning. In particular many objects have been interpreted wrongly and are misused.

Buddhism is the main religion in China, the Buddha statues are regarded as symbols of harmony and prosperity and have become popular in the western world. You don’t need to go to the temple to see the Buddha statues, you can buy from shops and markets.

As a Chinese feng shui practitioner, I have visited many client’s houses. Many have Buddha Statues. I have seen Buddha statues used in the  garden as watchmen, some have been used to stop the doors, some have been used as decorations in the bathroom and bedroom. Some people like Buddha Statues so much, and have a full cupboard of them. Some people have told me ‘I like this little man with big belly.’

This is wrong. Buddha statues should be treated with respect. Similar to other religious symbols, they should be placed in an honorable position of the house. Never put them in the garden, bathroom or bedroom.

If you really like Buddha Statues, it may worthwhile to learn the Buddha’s teachings and the journey to obtain the Buddhahood.