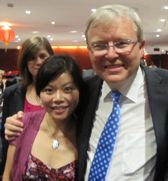 The 2012 water dragon year had been a strong force in good or bad for many people. Most people look forward to the new year, to have a new beginning. Without choice, we entered the 2013, the  year of water snake.

In Chinese culture, 春节(chun jie) Chinese New Year is the biggest festival of the year, it is similar to Christmas in western countries.

When I was young in China, that time China was quite poor. Every family had to save up for Chinese New Year. It was important to be able to put  feasts on table, make new clothes for children, and give kids red envelopes with money inside. The feast and celebration lasted for 15 days. Chinese New Year has always been a wonderful and dramatic time in my childhood.

Hope we be happy every day, and have a lot to celebrate in 2013.