Feng Shui and the Cricket Match 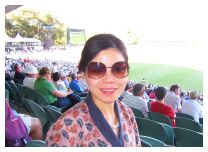 The Ashes Test Series — Australian Vs England cricket match is the biggest sport event  in Australia this summer. Tens of thousands people will watch the games. When I was in Adelaide last week, I went to Adelaide Oval to be one of the audience.

When I first came to Australia in 1990 from China, I had no idea about Cricket, and couldn’t imagine that there was a game sharing the same name with an insect 蟋蟀 (Xi Shuai). However, while I spent time to study in Australia, I also learned western cultures and western sports. I became a cricket fan.

I followed the game for years, and found  the combination of unique patience, great focus, perseverance and talent from the players to be inspiring. The Australian cricket team used to win every match, and I was truly proud of them.

However, in the current Ashes Test Series the Australian team has experienced great difficulties. When I was at the first day of the second test in Adelaide, I watched the English team take three wickets including Australian captain Ricky Ponting at the beginning of the match. It was a shocking start for Australia, and we lost the second test to England.

As a feng shui consultant, I was interested to find out what happened to our captain from feng shui perspective. (In here, feng shui refers to Chinese metaphysics). Quite often, if the leader of the team is in his good life cycle, the team can achieve good results. Ricky Ponting was born on 19/12/1974. He was born in the year of wood tiger. 2010 is a year of metal tiger. From his birthday,he is a yang wood person sitting on a Star of General, he is destined to be a leader of sports or soldiers. 36 is his turning point in life cycle. 2010, the metal element clashes against his wood, and the tiger of his confronts the Grand Duke tiger, therefore, he is in a very bad situation, and he had few good games this year.

Hopefully as the year draws to an end, his luck will improve.