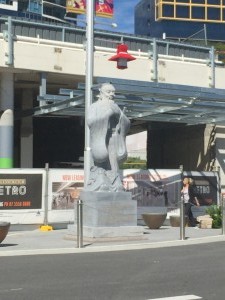 Last year, Gold Coast Council engaged me to provide feng shui input for the design of Wealth Pai Fang and the position of the Confucius Statue.

However, there is another argument for this facing directions, people will see his face when driving walking down Davenport Street. The down side is that he will have his back to the pedestrians on Young St, and the spot lights would shine on the back of his head.

To counter act this, I have recommended to move the statue footing about one meter back, and adjust the spotlights to shine on his face rather than his back.

I visited Gold Coast lately, and saw the Confucius Statue standing at the centre of the Chinatown, facing the centre of the site. A red light had been installed to shine on his face. They couldn’t move the footing back, but it still looks good.

I’am happy to see the Confucius Statue standing there as a symbol of wisdom.