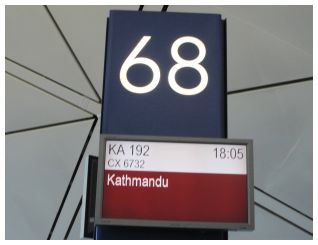 My trip to Nepal was planed three months ago, and it was completed in September. Despite the annoyances of the dust and stomach bugs, the whole trip was an unforgettable experience.

Three months ago, when I learned that my Tao master is going to Nepal in September to propagate Tao, I decided to follow her.

We spent three days at a temple in Kathmandu to do some charity work. After that, with a temple friend, we flew to Lumbini to visit the Sacred Garden where lord of Buddha (Buddha Sakamoni 悉伽牟尼佛) was born in 623BC.

Lumbini is  SW of Kathmandu, near the Indian boarder. It was an honour to visit the birth place of the lord Buddha. 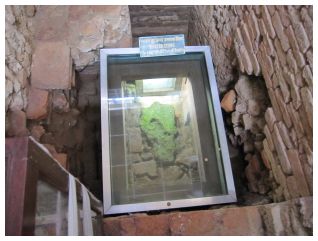 The Sacred Garden is spread over 2.56sq.km, and possesses all the treasures of the historic area. The Ashokan Pillar carries an inscription identifying the holy site as the  birthplace. As a global initiative to promote Lumbini as a center for world peace, many countries have constructed temples, monasteries and stupors in the International Monastic Zone inside the Sared Garden. The picture in the left is the Lord of Buddha’s exact birth place.

Cars were not allowed inside the Sacred Garden.  We didn’t have enough time to visit each place by foot, therefore, we hired a man powered three wheels bicycle(三轮车） to take us around the places. 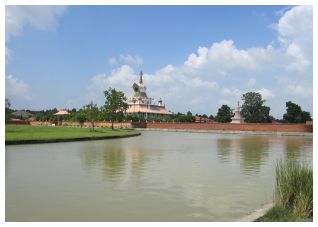 We visited Chinese temple, found by Chinese Buddhist society, it looks like it has been there forever. It is in traditional Chinese style and looks a like the forbidden city in the Sared Garden. Korea has a three levels tower outside the Chinese temple, it is not yet completed.  Almost every country has a temple there. Thailand, India, Japan, Vietam, Nepal, Lebanon, France, USA, Australia…They were all founded by  Buddhist communities in the respective countries,  to promote peace. Many are still under construction. Visiting the different style buildings in this massive sacred garden,  is like visiting all the embassies in Canberra, Australia. The different is they are spiritual, not political.

The Sared Garden is the main attraction in Lumbini. The development zoom was designed by Japanese architect Kenzo Tange in 1978. I checked the master plan, it has a good feng shui layout. The vision for the sacred garden to be entirely surrounded by water and only navigable by boat. The mountain surrounding in the distance, embrace the sacred garden.  Many trees, flowers, birds and monkeys  add positive and peaceful energy to the place.

After a day in such a peaceful and beautiful environment, we came out the gate and returned into the dusty, rural town.