During this trip, a special event has brought me to 湖南 Hu Nan Province. 长沙 Chang Sha is the capital of the province. When we were their, we organised a trip to 韶山 (Shao Shan). Shao Shan is the birth place of Chairman Mao (Mao Zhe Dong), the founder of People’s Republic of China. Because of him, Shao Shan has become one of the famours attractions in Fu Nan Province.

I was curious to find out the feng shui of Chairman Mao’s birth place. It was about one and a half hour drive from Chang Sha. During the journey, I observed the environment very closely, and found some interesting facts.

2. Chairman Mao ‘s birthplace is at 韶源 (Shao Yuan). The location of Shao Yuan from Shao Shan map is identical to the position of BeiJing on China map. (mirror image)

3. Shao Shan is supported by one of the 72 mountains – Shao Feng.

4. Shao Shan is nourished by the famous river-xiang jian.

5. Chairman Mao’s childhood home is sitting south, facing north. There are two ponds in front of the house. The bigger pond was the one where Chairman Mao learned swimming. The smaller pond was used to water the crops.

6. The house is located at a armchair position, three directions have mountains, with water in the front. 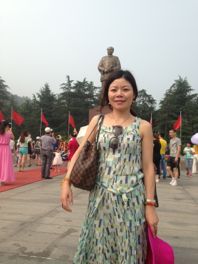 We  also visited 滴水洞 (di shui dong). The ‘water drop cave’. Mao called it West Cave. It is located at the west of Shao Shan. Surrounded by peaks and forests. It has a pleasant climate. Mao wished he could reside there after retirement.

The cave is not a cave. It was a secret building which was built in 1950s for Chairman Mao and important people’s meeting and retreat.