The First Lady of China 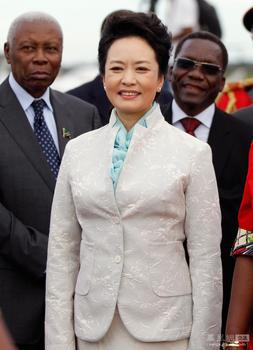 It was rare to see Chinese first lady on the international headlines. In China, politics has always been a men’s thing. However, things have changed. Recently, the first lady of China 彭丽媛(pen li yun) accompanied her husband – Chinese president 习近平 (xi jing pin) visited four countries. This visit has been widely reported in international media.

From Chinese metaphysics, in the current period, the 坤 (Kun) — female energy arises. More and more female CEOs, politicians, artists, authors appear in the world. It is not a surprise that the Chinese first lady has stepped on to the world  stage.

彭丽媛(pen li yun) is a mother, wife, Chinese folk  music singer. She became famous and successful at young age through her own talent. When I lived in China, we watched her performances often.  Her voice is like a nightingale, beautiful and powerful. As a first lady of China, her beauty and charm are eye catching. She is the World Health Organization Goodwill Ambassador to fight AIDS and Lung Disease. She has done a lot of work in the public sector. As a first lady of China, I believe she can help a lot more people, to restore their  health and harmony.

The balance of yin and yang is the fundamental of harmony and prosperity. Having a prominent first lady will help to restore yin and yang to Chinese politics.