The Voids and Houses 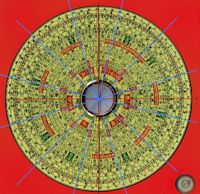 As a professional feng shui consultant for more than 15 years, I have had quite a few experiences with houses which supposedly have ghosts. The reasons for the feelings have been various. Some houses have too much yin energy, hardly any sunlight coming through. One common reason is that the house accidentally sits on the void lines.

From 杨公风水Yang Gong Feng Shui compass, you can easily define the void lines. There are six lines, twelve exits. These are the spirit paths. Churches, temples or cemeteries should be built in line with the void lines. For houses or apartments, it is best to avoid the void lines.

If a house is facing the void line, spirits will pass through the house. They are mostly harmless, but some people can feel them and be scared by them.

For one of my cases early this year, I received an urgent call. I was requested to check a newly built house. The house had been completed only a couple of months. It looked glamorous. The owner of the house looked frightful when she greeted me. She told me they like to play Mah Jong, and often have friends over to play together till late. When they first played MahJong (Chinese tiles game) in this house, after midnight, she saw shadows passing the house.  She thought she was tired. Weeks later, they played Mah Jong again, the same thing happened. She was worried, and talked about it, her son said that because she played too much Mah Jong. They played the game again on different day, her son and guests all said that they all saw some passing shadows. She also heard sounds. They were really worried, and asked me to check if there were any ghosts in the house.

After hearing all this, I read my protection mantras aloud and drew out my Yang Gong Feng Shui Lou Pang. I took a few different spots to examine the aspect of the house. Every result showed the house was sitting and facing one of the void lines. The house is a spirit path. From 11pm, the yin energy arises, some people can see or feel the passing energy.

I recommended the owner of the house to angle the main entry to a certain degree. They did it in the very next day. Since then, they play Mah Jong happily, no more complaints.