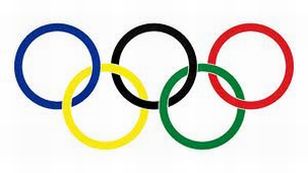 It is a high time to talk about London 2012 Olympic games. Olympic is the highest standard of international sport. It takes four years to get ready.

London Olympics started more than a week ago. The whole world has its eyes on the games. There is so much to see, and so much to enjoy. The spirit of the Olympics is reaching every part of every country.

The Olympic flag is a symbol of  the Olympic games. It is  five rings on a white background. The five rings represent the five continents. They are interlaced to show the universality of the Olympics and the meeting of the athletes of the world during the Olympic Games. The six colours: white, blue, yellow, black, green and red  are the colours of each nation’s flag.

From a feng shui perspective, the different colours represent different elements. There are five elements in this symbol: fire (red), earth (yellow), metal (white), water (blue, black), wood (green). The five elements are the basics of the universe. The interactions of the five elements produce the all kinds of results, and are reflections of the world. In London 2012, the reaction of the Olympians from five continents produces the results of the games. 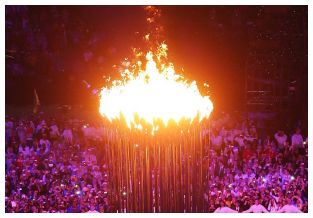 The moto of the Olympics is: Faster, Higher and Stronger.

From the games, we can see all the Olympians have a match of their life. They push the standard to be faster, higher and tougher.

The philosophy of feng shui is harmony. Based on I Ching theory, when things reach the peak, they will then go down. If a thing has too much yang energy, it will break, and become yin energy; when the yin energy reaches the peak, it turns to yang energy. I wonder if Faster, Higher and Stronger will have an end?

Compared to the moto, I like the Olympic creed a lot more :
The most important thing in life is not the triumph, but the fight ;the essential thing is not to have won, but to have fought well.  That giving one’s best and striving for personal excellence is a worthwhile goal. It is a lesson that can  be applied  to each one of us.

To mark the ancient origins of the  Olympic Games,  the flame is lit in Olympia (Greece) a few months before the Games start. The Olympic flame  is initially lit by the sun’s rays. When the last relay runner lights the cauldron, the flame has reached its destination, where it will  burn during the Games. The flame is extinguished on the last day of the Games,  during the closing ceremony.

Fire is a sacred element of feng shui. It represents the sun, the brightness, the warmth. Without fire, we can not survive. The Olympic flame can only be lit by the sun’s rays, it represents the great energy of the universe, the connection of the universe. The fire element also relates to fame, reputation and entertainment.

Hopefully the Olympic flame will continue for ever.